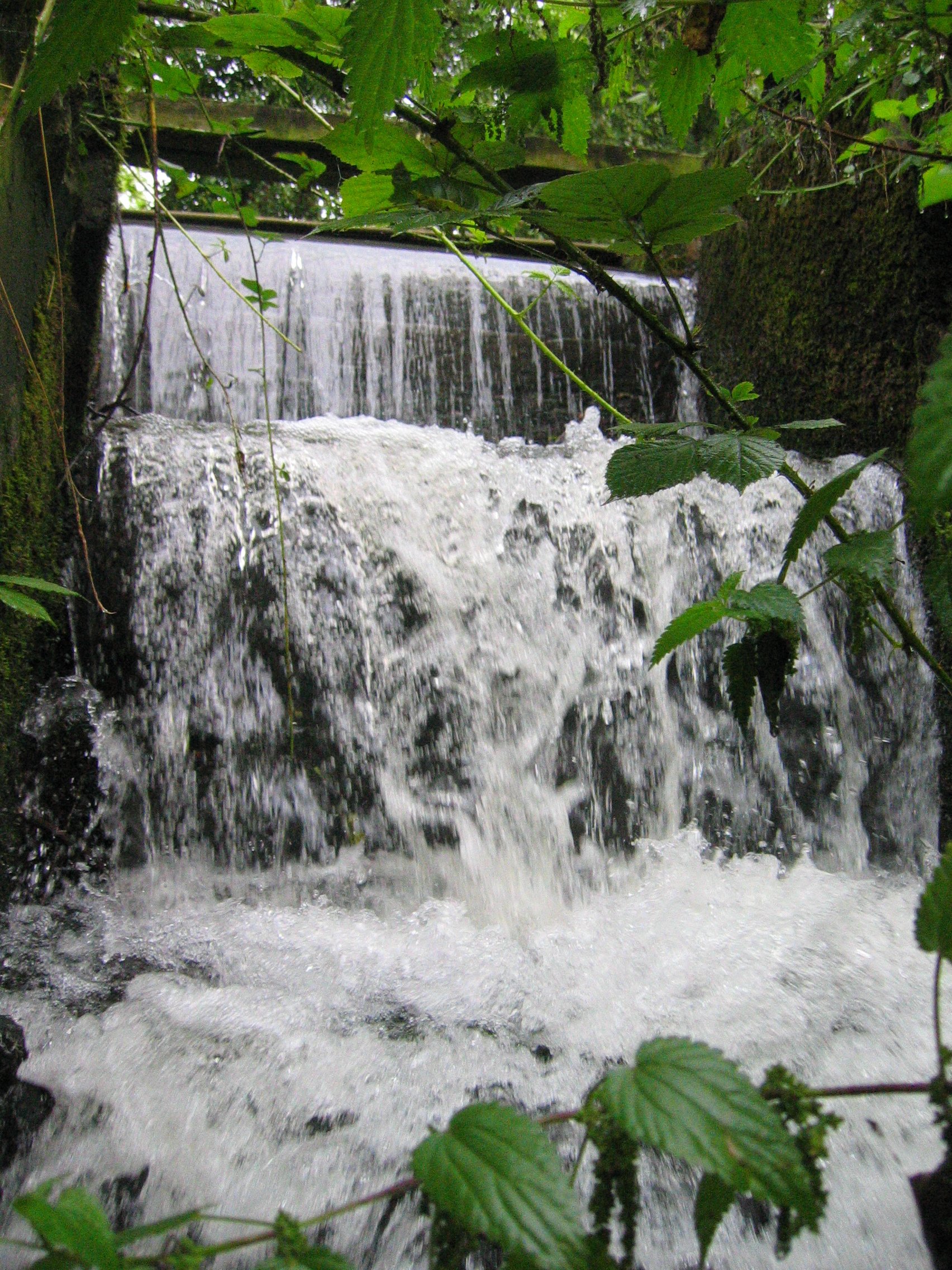 The water is supplied by the river Soar and water levels are controlled by a number of sluice gates. 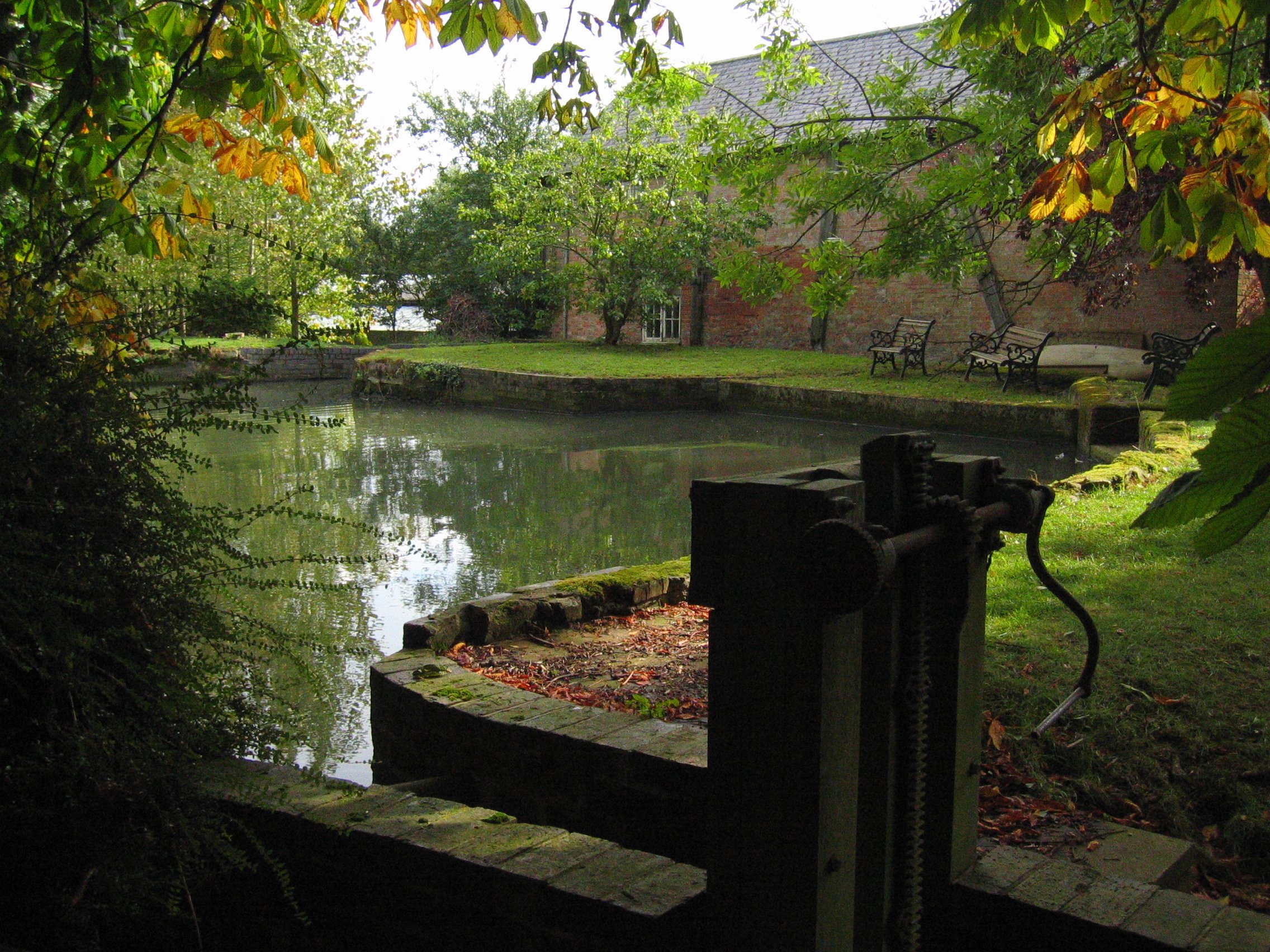 The mill is a simple process helped by gravity so I will start at the top!

The GRAIN is stored on the top floor in wooden bins. Originally a large number of smaller bins were used so that the miller could separate the small quantities of grain brought in by many people. The grain was hoisted up in sacks by the SACK HOIST, through the trap doors in each floor and man handled into the storage bins. Now we have large bins to hold a large quantity of grain which is fed into the mill using a large AUGER after the grain has been through a cleaner to remove the dust, straw and other foreign objects. 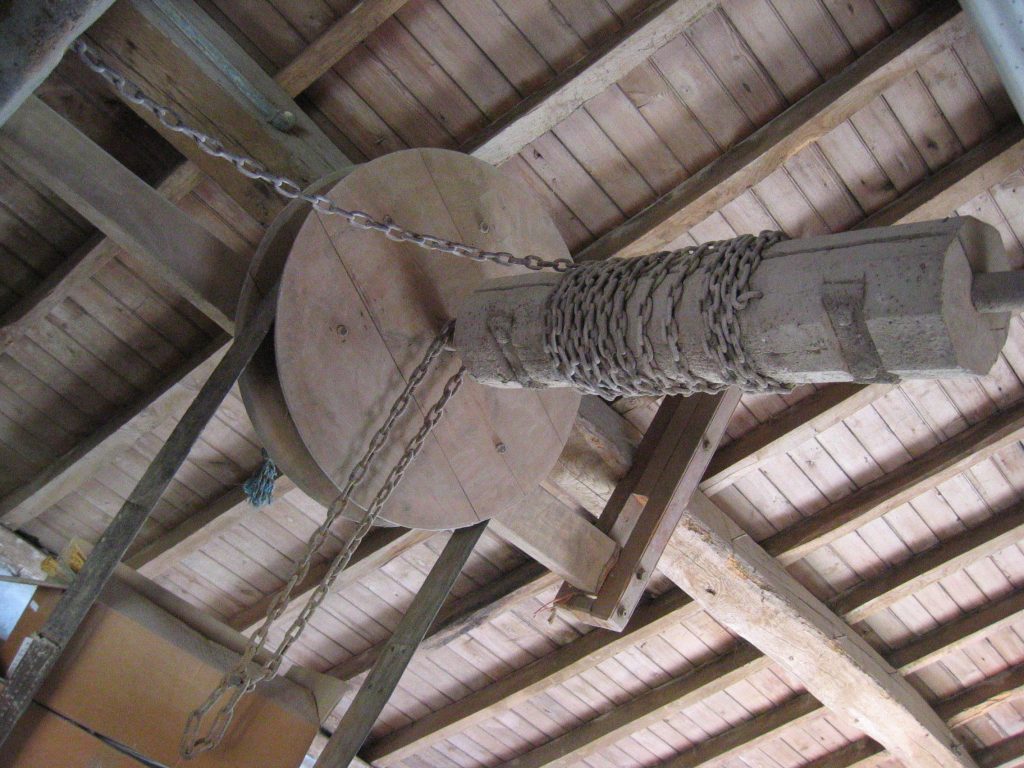 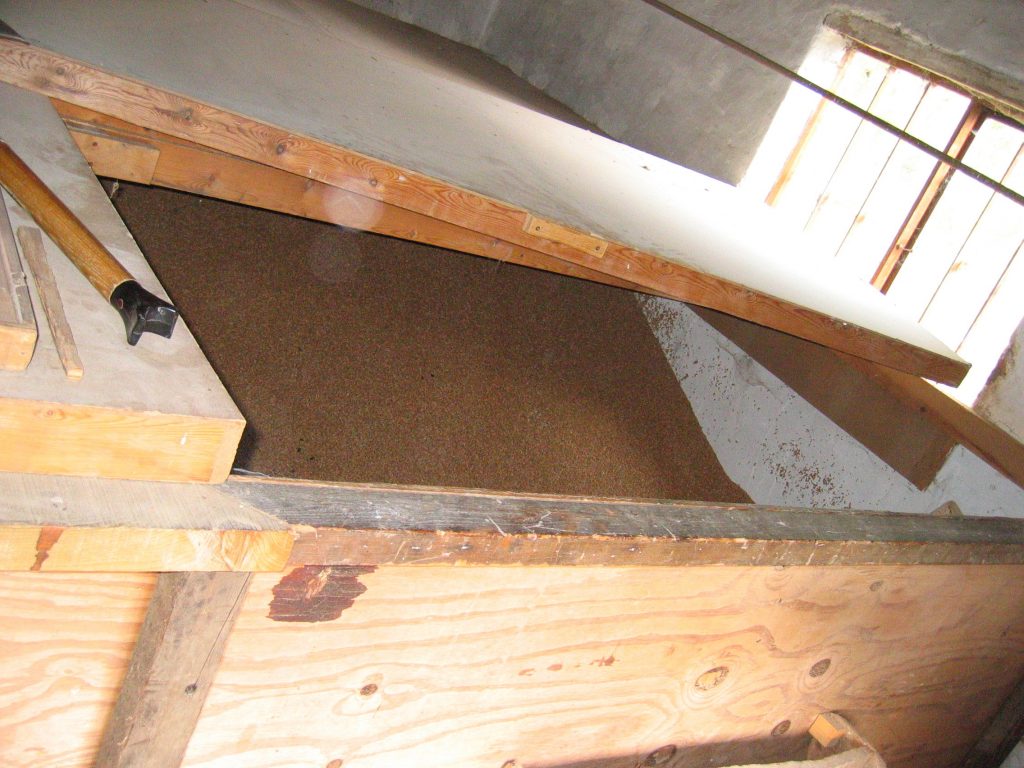 The HORSE this is supporting the HOPPER in which the grain is fed and then fed into the grain SHOE which is then the DAMSEL that ‘chatters away all day’ in the centre of the stones agitates the SHOE which holds the wheat & controls the flow into the Tun case through the hole in the centre of the top stone & is pushed through the space between the stones & is milled into wholemeal/Wholegrain flour. 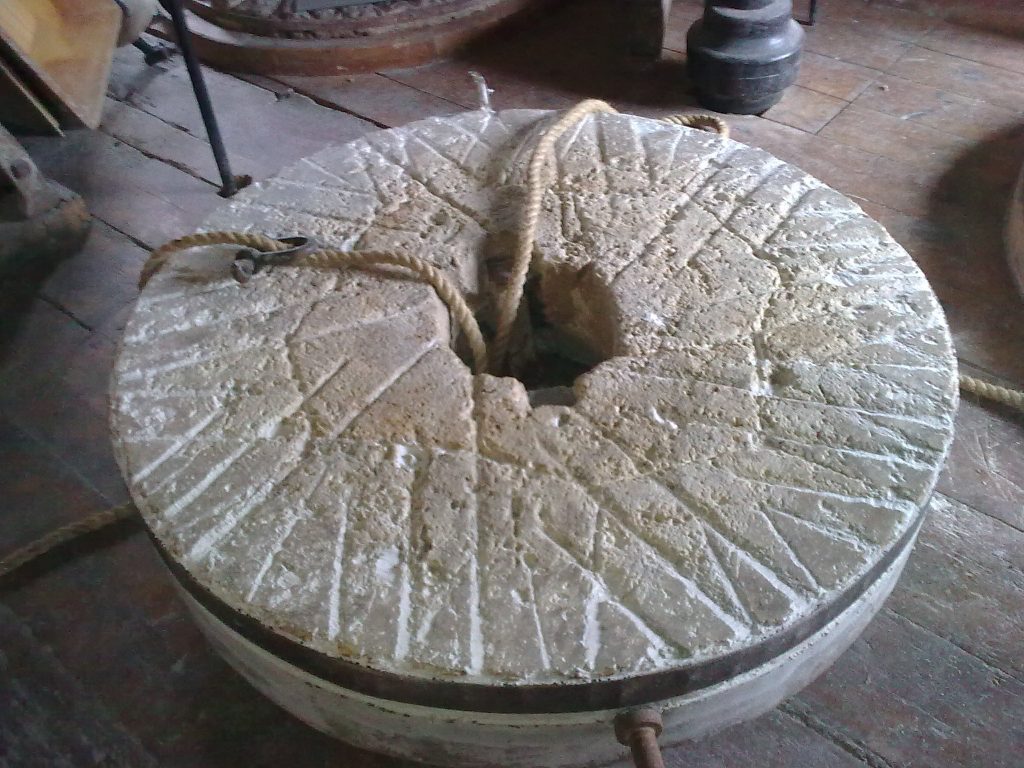 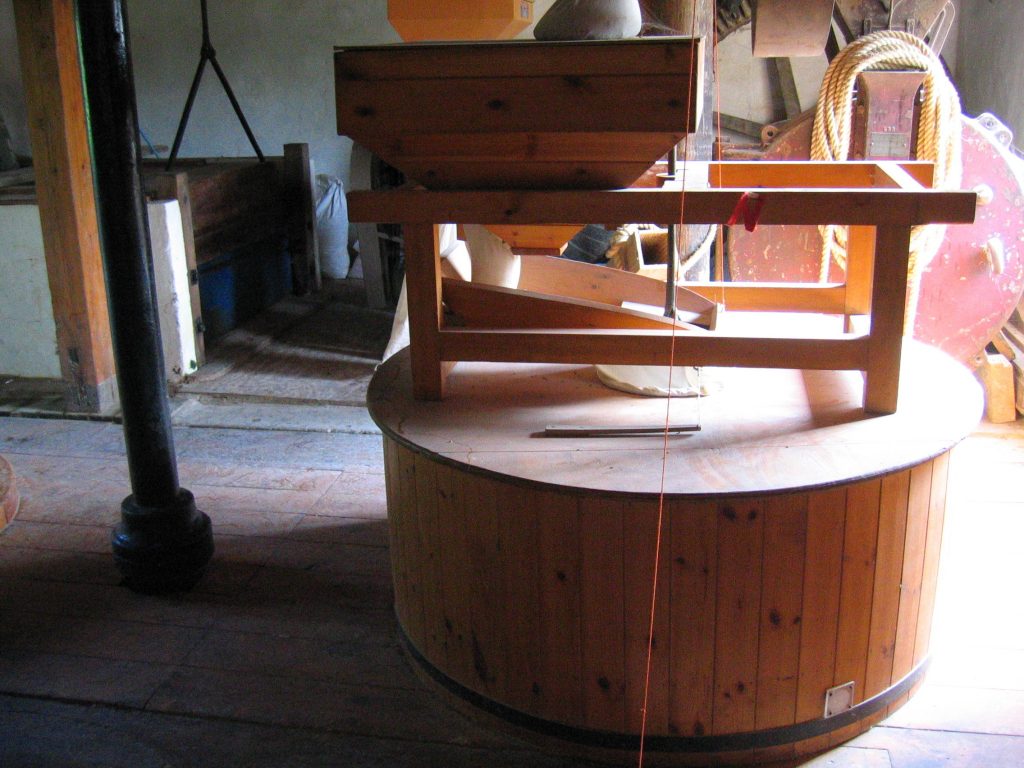 The TUN CASE is made of wood & built around the stones to hold the horse and to contain the flour and directs it down the shute into the bag below.

The MILLSTONES on the stone floor are both French Burr; the finest stones for production of Flour. They were made from segments of stone quarried just outside of Paris, cut to fit together and then an iron band was heat shrunk to hold them together, similar again to cart wheel construction method. A concrete backing was then cast on the back of the burr to increase the overall thickness and weight.

An Iron Bar or Rynd fits over the Mace on the stone spindle and the runner stone balances on this as the spindle turns the stone. The bed stone is fixed.

The MILL STONES work hard cracking the wheat and the milling into flour, after hours of grinding, they show signs of wear and the stones have to be ‘Dressed’ in the hayday skilled stone dressers would travel the country to dress stones. Now a days we have had to learn the skills and dress them ourselves. 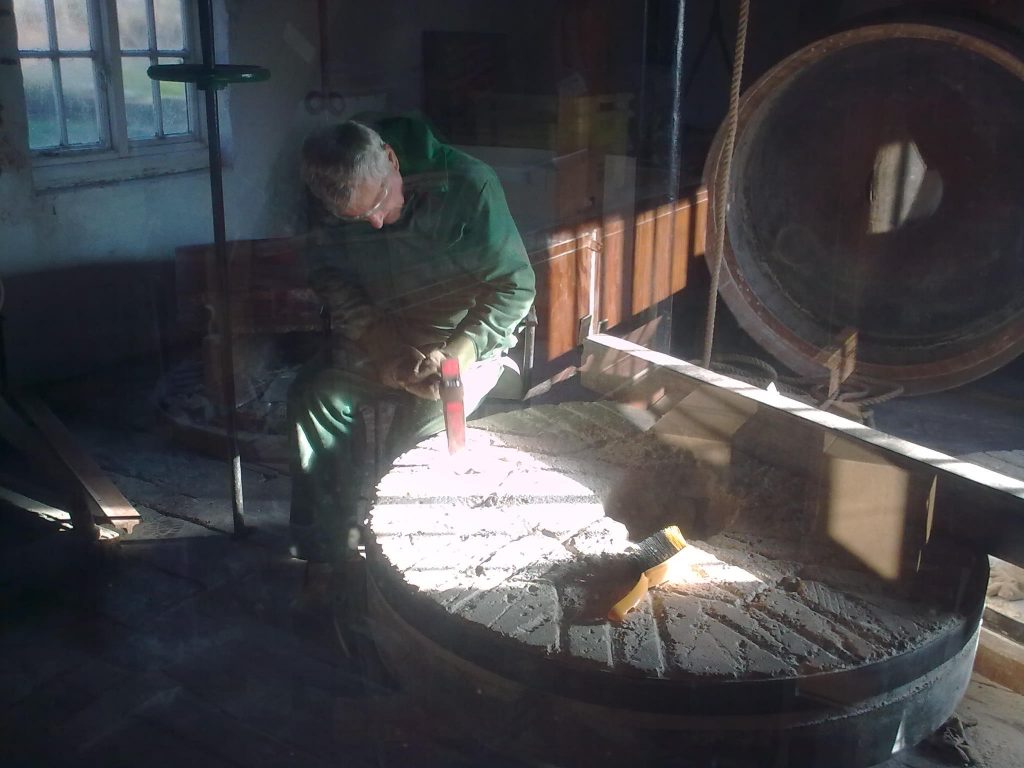 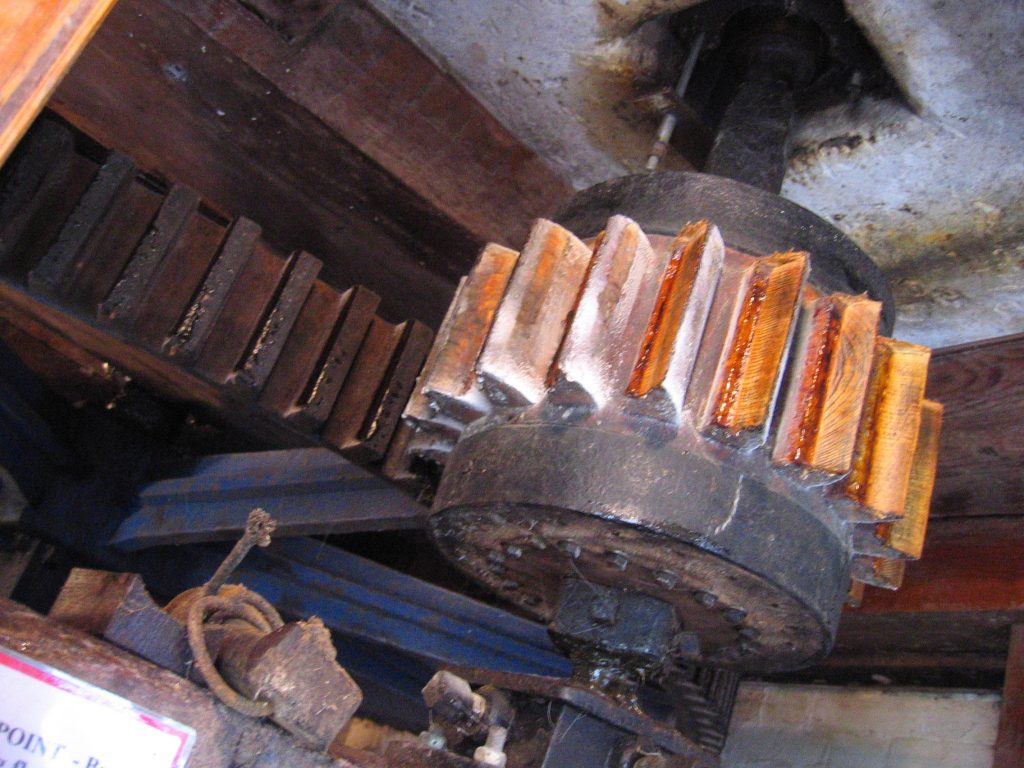 The WOODEN STONE NUTS on the ground floor which drive the mill stones were made by a wheel wright in North Kilworth in the traditional manner, using a sold elm boss with gear teeth stubs slotted in the same way that an old wheelwright would make a cart wheel.

The PIT WHEEL and WALLOWER gearing came from Clock Mill at Measham, which at the time of David’s restoration programme was being dismantled due to subsidence. These gears has been cast around 1930 and were in very good condition. We were able to modify them to fit and use them in conjunction with our existing water wheel, spur gear and shafts. 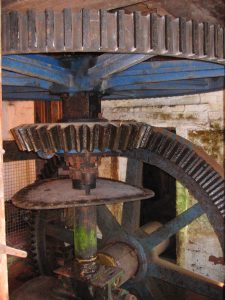 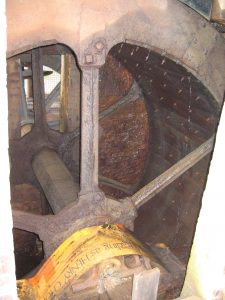 The WATER WHEEL 3.6 Metre Diameter and 1.5 metres wide is constructed from Cast Iron, the sole is lined with elm boards and the buckets made of steel. It is an overshot wheel to make the most of energy efficient use of the limited water supply.

This process produces Wholegrain otherwise known as Wholemeal flour, to make brown  or white flour we have to seperate the Larger particles out, we do this using a centrifugal seperator. 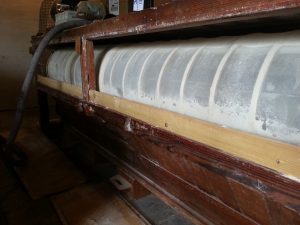 This is a rare peice of machinery and works by spinning and applying a force that will push the flour through the different graded mesh and then drops into the bags below.